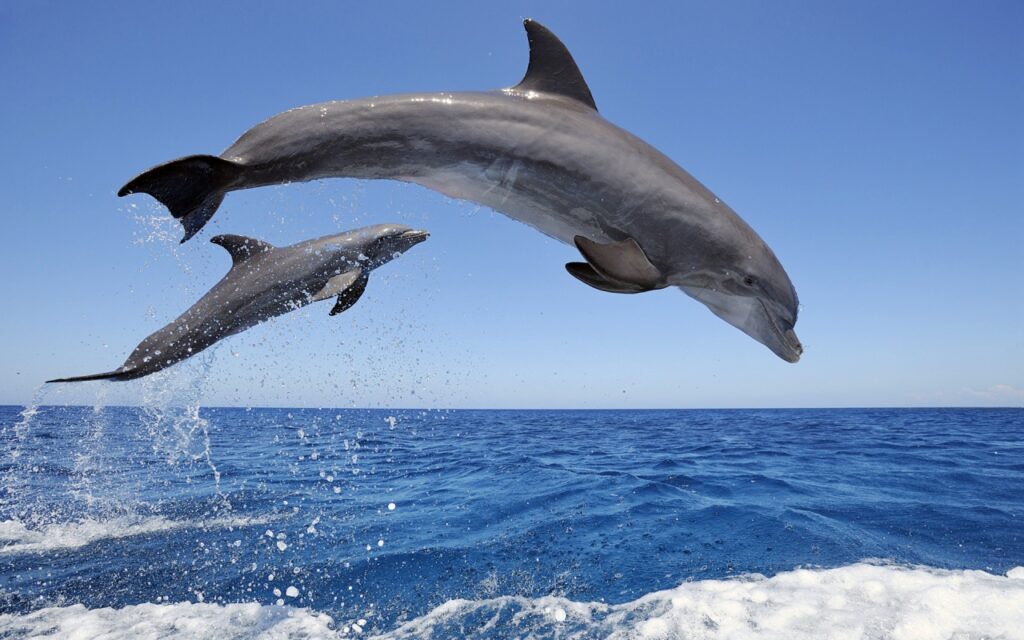 Dolphins and their Babies 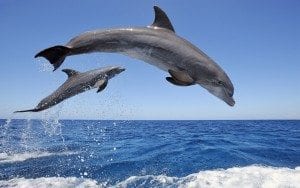 Who doesn’t love dolphins? Who doesn’t love baby animals? So you have to love baby dolphins! We’ve all seen TV shows and movies with cute dolphin babies swimming next to their mothers. All children love these images. If we’ve been lucky, maybe we’ve seen dolphin mothers and their babies in a water park or — even better — in the natural environment of the sea.

SOME BASIC FACTS ABOUT DOLPHINS

Dolphins are mammals closely related to whales and porpoises, range in size from 4 ft. and 90 lbs. up to 30 ft. and 11 tons, are found worldwide in shallower seas, and are carnivores (they eat mostly fish and squid). The name “dolphin” is from the Greek for “womb” — so can be interpreted as “fish with a womb.” Dolphins are smart, very smart. And dolphin mothers, like human mothers, love their young and are devoted to them.

Like whales and porpoises, dolphins are descended from terrestrial mammals; their ancestors entered the oceans about 55 million years ago. Female dolphins, on the bottom of the body have one gental slit and two mammary slits on either of it. The have acute eyesight, in the water and out, and can hear frequencies far above the limits of human hearing. Dolphins have a small ear which conducts sound to the middle ear and is also used for echolocation. Although scientists are not sure exactly how to measure dolphin intelligence, they generally are considered among the most intelligent animals on Earth. Their behavior has been studied quite a bit over the past few decades.

Dolphins are highly social creatures, living in “pods” of up to a dozen animals, but pod sizes and organization may vary between species and locations. Dolphins communicate using a various clicks, whistle  sounds and similar vocalizations. They also communicate with touch and posturing. They have a culture, just as humans do, that involves tool-use, care giving, and organized aggression. Dolphin copulation takes place belly to belly, and some species engage in complex foreplay. The gestation period can vary among species and ranges from 11 to 17 months; females give birth usually to a single calf. They become sexually active at a young age, even before maturity.

DOLPHIN MOTHERS AND THEIR “CALVES”

A female dolphin can bear a calf as often as every two years, but birth intervals usually average three years. Dolphin babies, or “calves” are born in the water, usually tail-first, but sometimes head-first deliveries happen. Their umbilical cord snaps off during delivery. Babies are delivered by females with the aid of another dolphin, who takes the role of midwife. This assisting dolphin will stay close to the new mother and her calf; this “auntie” dolphin it may be male or female and is usually the only other dolphin a mother will near her baby calf. Like most mammals, dolphin mothers take care of their babies and young, teach them necessary socialization skills, and swim near them at all times. Baby dolphins stay with their mothers for until they are able to survive by themselves, after about six years. Baby dolphins are about 40-50 inches long and weigh about 25-45 pounds. Right after birth, the calves dorsal fin and “tail flukes” are very flexible with no firmness, but they eventually stiffen. Babies are darker than adult dolphins and have vertical lines on their side, which disappear in six months. Their calves nurse below the water but close to the surface and suck from nipples in the abdominal mammary slits. Nursing starts within 8 hours of being born, and each nursing last about 5 to 10 second. The mother stays close by the baby calf and lets her swim in the “slipstream” wake that the mother creates as she swims. This help the baby swim. The baby can vocalize in just a few days after birth, but their unique voice characteristics develop later. The bond between mother and baby-calf is very strong and last for a long time. These intelligent animals love their babies just as human mothers do.

SOME OFF-BEAT FACTS ABOUT DOLPHINS

There is no related posts.

Brett Arends’s ROI: Working for yourself? Open your eyes to this great deal from the IRS

Surfers honor George Floyd in ‘paddle out’ held around world

Jobs Report Shocks Everyone But Trump

‘The Help’ is currently the most watched movie on Netflix