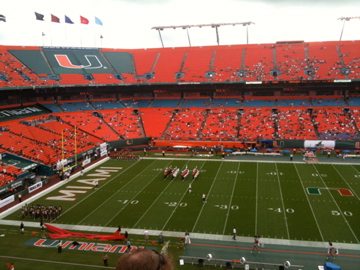 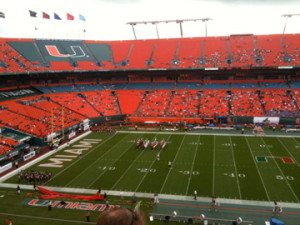 Go Hurricanes! Florida has had some great college teams, the Hurricanes are one of them. Miami is a place of athletic bodies, hot beaches, and hot football. Here is some background info, news, and fun facts about this powerhouse football team.

BACKGROUND — The Miami team The Hurricanes represents the University of Miami (UM), as most good football fans know. They are part of the National Collegiate Athletic Association, or NCAA, and the Atlantic Coast Conference, or ACC. The football program at UM in 1926. The Hurricanes have won five national championships, in 1983, 1987, 1989, 1991, and 2001; they are tied with Southern California (behind Alabama) as Associated Press National Poll Champions. The hold several notable NFL draft records and have the most players active in the NFL of any university. The coach is Al Golden, and the UM stadium is the Sun Life Stadium in Miami Gardens.