BREAKING NEWS
GMT+2 10:38
Home Uncategorized I Once Was A Pirate 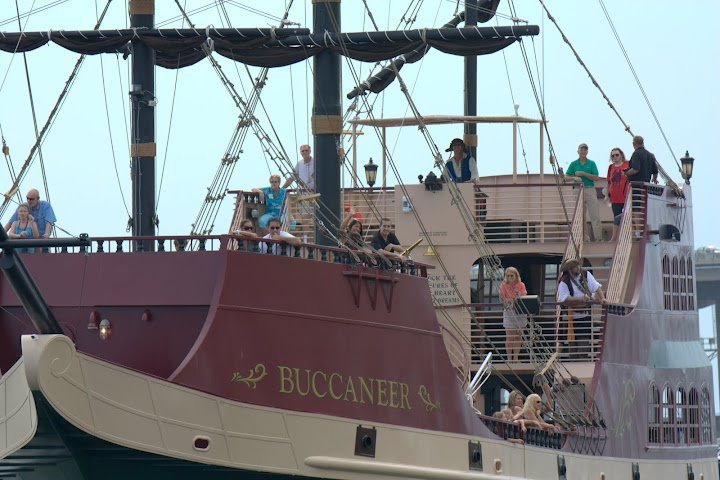 I Once Was A Pirate

I once was a pirate on the massive, hundred ton Buccaneer. We sailed all through the Destin Harbor. We had a fearsome captain, loud cannons, and the tastiest food on the seas.

Although I didn’t work for Destin’s premier pirate cruise, The Buccaneer Pirate Ship, every lad and lass onboard becomes a pirate for the day. The experience is, well, quite magical.

As we boarded the ship, the crew had us stand in the middle of the boat to have our picture taken. We waited as the other families boarded the ship and got their picture taken before we set sail. After we set sail, the massive ship gently guided across the water on the Destin harbor. The weather, as always in the panhandle of Florida, was exquisite for a perfect day out on the water.

As we started to make our way towards the Destin bridge, the captain came down from the ship’s bridge and stopped by the cannon hanging on to the starboard side. He spoke into his microphone so that the entire ship could clearly hear what he had to say: “These people are here enjoying a nice, quiet meal. Let’s change that!” and fired a shot from the cannon. Of course, the cannon was not loaded, so that the people dining nearby had nothing to fear but the jumpscare of the shot.

The other members of the actual pirate crew gave us a nice introduction for safety protocols aboard the ship; such as where the life jackets are, that the stairwells need to be cleared at all times, and so forth.

Once all the introductory process was out of the way, we found ourselves out on the water. Not very far from the shore, and definitely not far from the other boats in the harbor, but close enough that other boats could hear us laughing and have a grand time.

The activities kept the children very engaged. First, they helped every child look like a pirate with face painting. Once they all looked the part, they enjoyed plastic sword fighting, water gun battles, hula hoop contests, dance offs, and plenty more.

After the short excursion out on the water, the captain pulled the ship back around and brought us under the bridge. Now that we were in the sound, the captain trusted the wheel to his first mate so that he could take the children down into the cabin and show off his plentiful treasure. Much to the surprise of the children, when they got back up from the cabin, they found a treasure chest in the water, which the entire pirate crew helped pull up onto the ship. The captain opened up the chest and treasure was to be had for all the pirates. The ship then gently brought us back to the docks where we ended our pirate adventure.

The crew was very calm and gentle with the children, made safety a priority for all guests, and never broke character. The jokes were funny and could appeal to pirates on board of any age. The food in the galley was delicious as well. Although I had a lovely trip with the crew of the Buccaneer, the most memorable part will be chanting: Yo Ho Ho and a Bottle of Root Beer!