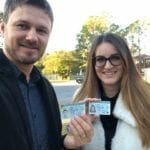 On January 17, 2019, after pursuing the American Dream for ten years, two of AJ’s Seafood and Oyster Bar’s treasured employees finally became United States citizens. “We took the oath in front of many of our friends from AJ’s, and we were just so happy! We’re still happy!”

Vadim Burduja came to the United States from Moldova in 2007 on a Student Visa. He did not speak a word of English. In May of 2007 a friend told Vadim that AJ’s was hiring an oyster shucker. He gladly accepted the position on the condition that the friend would translate for him. That summer, during the bustle of the summer season at AJ’s, Vadim began a hands-on education in the English language. He also met a girl online. From Moldova. Her name was Alina. 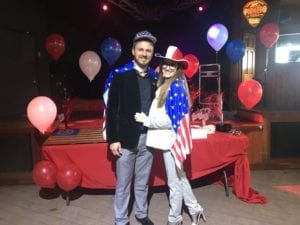 In the Spring of 2009, Vadim was working at AJ’s and received a call from his long-distance love Alina. To his surprise, she had secretly traveled to the United States to meet him and needed a ride from the airport. Vadim happily obliged, and the couple was married two months later. Alina spoke English, and began working as a hostess at AJ’s soon after arriving in the United States. 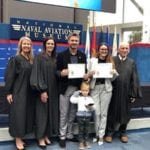 Vadim and Alina are incredibly dedicated workers. They both advanced in their careers at AJ’s- Vadim became a busser, a bar back, a bartender and eventually a manager. Alina became Head Hostess. The doting couple bought a home in Destin and have a three-year-old son. Since they were married in 2009, they have actively pursued citizenship. “Thousands of people can only dream to come to America , but we had the opportunity so we decided to stay” said Alina. The couple invested money, took classes, and finally completed their path to citizenship on January 17. “It has not been easy but here we are 10 years later still living The American Dream.”

50 revelations about ‘The Office’ from the ‘Office Ladies’ podcast

Donta Scott erupts for 25 points and six rebounds as Maryland upsets No. 17 Illinois, 81-65