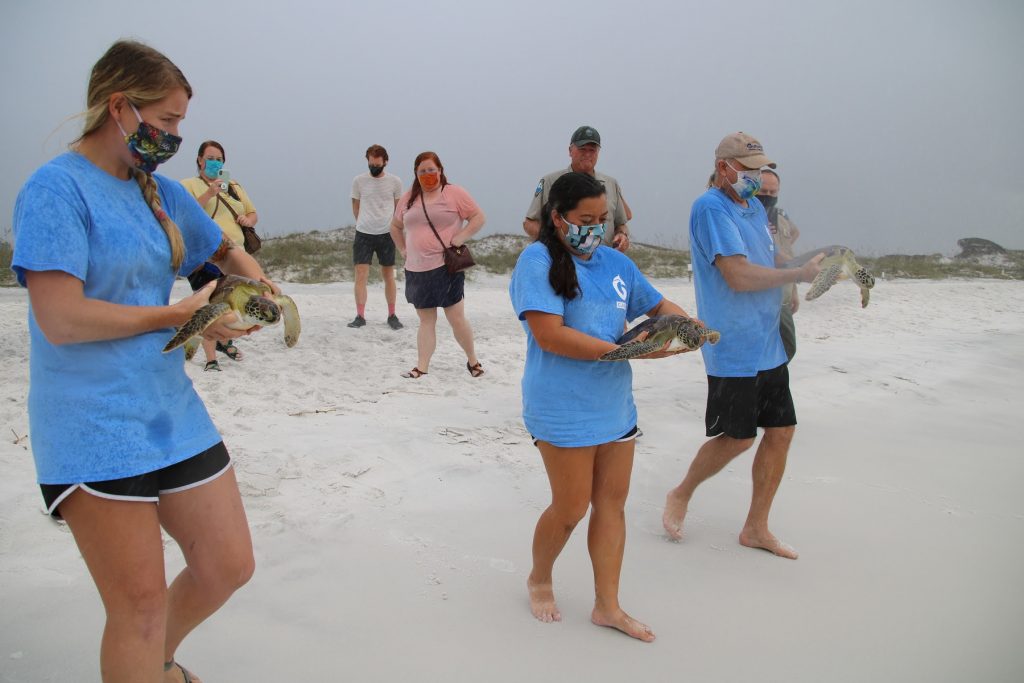 Despite the rainy weather, there were smiling faces all around as the Gulfarium C.A.R.E. Center released some of it’s recent patients. “It’s been an extremely busy sea turtle season for our C.A.R.E team,” states Will Merrill, Gulfarium Marine Adventure Park’s president. “Watching the turtles head back out into the Gulf is always an exciting and joyous event for all!”

All four sea turtles that were released were juvenile greens that had been reported by fishermen at Navarre Beach Fishing Pier.

The first turtle to be released was Pinny, weighing 42.5lbs, who was hooked in the mouth on September 25th, 2020. The hook fell out prior to arrival to the C.A.R.E. Center but radiographs showed two ingested hooks and a fishing swivel in her intestines. These items all passed naturally without the need for surgery. This was Pinny’s fifth visit to the C.A.R.E. Center, with her first visit back in 2018.

Blackfin was next to be released back into the Gulf. This sea turtle was found entangled in fishing line, wrapped around pier piling on July 12th, 2020. Fortunately, radiographs revealed that no foreign debris or fishing gear had been ingested by the turtle but he did need to be treated for pneumonia before being ready for release.

The two smallest turtles, Dot and Links, weighing 11lbs and 9.5lbs, were both released at the same time. Dot was superficially hooked in the left front flipper on October 15th, 2020. The hook was removed and radiographs showed no other ingested marine debris or fishing gear so Dot was quickly ready for release. This was Dot’s second visit to the C.A.R.E. Center, with her first stay lasting from June 28th through August 24th, 2020 due to receiving surgery for the removal of a hook from her esophagus.

Links arrived at the C.A.R.E. Center on October 8th, 2020 after being hooked in the mouth by fishermen. The hook was removed upon arrival to the center and radiographs revealed no ingested foreign debris. “Links arrived at the C.A.R.E. Center with a missing rear right flipper,” explains Terra Throgmorton, Gulfarium’s Medical & Stranding Coordinator. “This was from a previously healed traumatic injury which also resulted a an injured carapace. We monitored the wound and were very happy with how well it healed!”

Follow the C.A.R.E. Center on Facebook to learn more about sea turtles and the center’s rehabilitation efforts.

The Gulfarium CARE Foundation, a 501(c)(3) non-profit, is proud to act as a beacon for coastal conservation through marine animal rescue and rehabilitation. Donations are tax-deductible and can be made online on the C.A.R.E. Center’s page.